I have been most anxiously expecting a letter for some time past, my dear mother, that I might hear something more of this appointment of Nicholas’s. Burwell wrote me that Mr Clay had named him to a place worth $ 1600. a year, but from you I have heard not one word, and know not how to account for your silence. I want very much to be informed what you all mean to do, & I am beginning to fear that the news was too good to be true; or that there has been some mistake. George left me the day before yesterday to return to school, after staying 3 weeks with us. I am somewhat disappointed in his progress, judging however by rather a superficial examination which I made by questioning him on his lessons. I fear he has a bad memory, & requires to have every thing explained to him more thoroughly than can be done at a public school. I tried to impress him with the importance of helping himself more than he seems inclined to do, & trying to understand & remember what he is taught, instead of repeating his task like a parrot, & never thinking of it again. I think you had better write to him, for it seems to me he wants rousing, from a kind of indolent state of mind into which he is falling. he satisfies his master, because he gets his lessons & behaves well in school & in the family, but it did not satisfy me to find how imperfectly he remembered what he had been taught, & how vague & indistinct his ideas seemed to be. he does not seem to be aware that one complete accurate idea is worth ten thousand legs and wings and disjointed fragments.

Joseph has received the money for the Franklin & paid all George’s expenses, so you need have no uneasiness; we are in your debt, not you in h ours. Jefferson however is in arrears with Joseph, & I want to know if his account is to be squared from the same funds which are still ample for the purpose. George’s clothing this winter will cost you n little more than the tayloress’s bill for making & trimmings. Joseph gave me a coat an old great coat, 2 pr of cloth pantaloons, & a waistcoat. the coat which was of fine blue broadcloth, turned & well made & trimmed with new gilt buttons, is really full as handsome as if new, & I had it lined with flannel for warmth. his last winter’s school coat, scoured & repaired will probably with his green Kilham & Mears get him through the winter. he had two pair of tolerable cloth pantaloons, (made I presume of some of Joseph’s, for the new ones which he had last year are entirely worn out) & the two pair more I am having altered will be quite sufficient I think to carry him through. his plaid great coat is quite too good to give up, if I can match the plaid I will have it lengthened, & it will do excellently well to roll snow balls in. in the mean time Joseph’s old camblet has made a wrap rascal which would carry him to the north pole. his flannel, he tells me is good, but about this, I must see Mrs Wells as she did not send it in with his other clothes. he will want winter socks, but as I thought you might possibly be having them knit at home, I did not buy any until I could hear from you.

I called on Mrs Stearns the other day, who is well and sends much love. I have not yet had time to visit Mrs Farrar. Sarah Webber is to live with Mrs Thomas Coolidge who being young & inexperienced in the ways of northern housekeeping & moreover of delicate constitution, requires some trust-worthy & skilful person to begin with. Thomas has taken a house in Chestnut Street next to G. Emerson’s & they will go into it before very long. [. . .]1 daughter $ 6000. a year. Sam Eliot has got into his palace which with the ground costs $ 70.000. but old Mr Lyman pays all. poor little John Bradford is dead, I presume with a fever but have not been able to hear. I pity that family from the bottom of my heart. they seem marked for misfortune, & I believe Margaret’s marriage with Wm Eliot has been one solitary comfort amid many troubles.

Mr Davis made so short a stay that I scarcely g[ot] any good out of his visit. I told him to tell you not never to be uneasy at not hearing from me regularly, for I am overwhelmed with business of one kind or other, & really have no not a moment’s leisure. this is a very busy season, & I have not the art of doing what the servants here call “turning off their work”. I have not no head to be a housekeeper, & fear I shall always make an unprofitable mistress mother and wife. the Babies have very bad colds which Bess fattens upon & Ellen pines under. they send love & kisses. Bess has grown the fiercest termagant I know, stamps & shakes her fist & reminds me in temper of Jane’s Mary, in person she is so thick & squabby as to be quite ridiculous. I have written as fast as my pen could drive, adieu dearest mother, love to all & most especially for yourself. 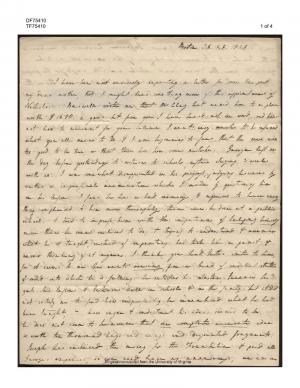