I wrote to Mary only yesterday my dearest Virginia, but as I have half an hour this morning, & Cornelia comes next in the regular turn, I shall put you to the expense of an extra eighteen-pence, in order to reply to yours of the 27th Aug. which I have just received. I feel the more inclined to this as my letters to you must have been frequently been lost, or it could never have happened that you would have heard from me less often than the others. I have written most regularly & punctually to each of my sisters in turn, throwing in a letter to Mama between whiles, so as to average almost nearly one a week to the house.I am exceedingly sorry to hear of your uncomfortable state, although I think it really desirable that Pat should have a brother or a sister to divide your solicitudes & be a companion for herself. my sister-in-law Mrs Swett, after a holiday of five years, has began business again, and expects some time in the winter to add to her stock. she is a good deal chagrined at the mischance, but I believe her friends think it a fortunate event. she is quite large, & every body knows the secret, except her own mother from whom she contrives to conceal it.—The new-married people are gone with Miss Goldsborough to Nahant, & I am truly thankful for this interval to our fatigues, although with me it will be pretty well-filled by the necessary attentions to the Hayes & Myers families. Mr Stevenson & Edward Coles dined with us yesterday & to-morrow, I believe, this party will leave Boston. I shall send Cornelia a couple of patterns by Betsy Coles, Miss Marshall’s handkerchief & Miss Hammond’s cap. I think perhaps the last may suit Mama, I have made one like it of plain bobbinet, & like it much for it’s simplicity. whilst on the subject of dress, I might as well add that the french sleeve with bands is beginning to be entirely worn. no new dress is made with the plain ‘gigot.’ the bodies are almost ‘ad libitum.’

Sept. 4th I was interrupted yesterday dear Virginia, & must finish my letter in haste this morning as this is the last good mail day of the week. there has been a company of french actors (of opera), in Boston for some time past, and but although I understood the music was delightful & the scenery beautiful [. . .] I did not think it proper to go into public at this time, & have hitherto repressed my curiosity. last night however they gave a concert for the benefit of the ‘Asylum of indigent boys’ and to this I went. the first piece was the overture of the Caravan which I thought very fine, but I was upon the whole disappointed. Robin Adair, on an exquisite flute with exquisite variations, a solo on the violin, & the Yager Chorus, sung by the whole company, were the only things that gave me much pleasure, & had it not been for the heat, & crowd, & high, hard benches, I should have wished you at my side to hear them. Mrs T: Coolidge with Miss Goldsborough & Susan Coolidge were in the box with me. Mrs C. plays very well on the piano, with a good deal of taste & delicacy & some execution, a little in the style of Mrs Watkins, but, perhaps, better. she is a strange thoughtless child, and I am afraid will shock the precise notions of the Boston people. last night she got tired of setting in a constrained position, & very deliberately laid back upon her husband, so as to exhibit her person in a more than reclining attitude to the whole theatre. Joseph whispered to me to interfere before she excited universal attention, & I, in turn, whispered her, that we should have a great deal of gossip about the languor of the southern ladies if the bride was seen lying down at a public concert. she rose immediately with all the grace & good humor imaginable, but I expect we shall hear that the scandal was commented on by the opposite boxes. Miss Goldsborough has more dignity than her sister, yet I do not like her half so well; there is a charm for me in the perfect innocence & ignorance of the world; and even in the kitten-like playfulness of Thomas’s wife which I do not find in the more artificial manners of the other. she Miss G— reminds me somewhat of Adeline Purnell whom Mama knows very well if you do not, & this very resemblance, perhaps, has served to render her a still greater favorite with Mrs Coolidge the mother, who is perfectly completely bewitched with her, & talks incessantly of her perfections—We have almost had a surfeit of music, this summer; some wealthy gentlemen of on Beacon & Common Streets, raise[d] a supscription for the purpose of engaging a full band to play upon the common for two nights in every week. you may suppose how plea[sant] it was in the bright moonlight evenings to listen to the horns, clarionets, & flutes, to say nothing of other less appropriate instruments, whilst we either sat at our windows, or walked over the fine turf of the Common, & under the elms & sycamores which skirt this pleasantest part of the City. another musical treat that I have had of late is an occasional visit from Nolcini the organist of our Church, who brings out the glorious tones of my Broadwood, in a way that almost reconciles me to it’s uselessness as far as regards myself.—farewell my dear sister, this letter counts nothing as written out of turn, & you shall hear from me again at the regular time. my Babies send love & kisses. they are both sweet creatures “though I say it that should not say it.” Ellen has as fine dispositions, I think, both moral & intellectual, as I almost ever saw, & Bess is so fat & good-humored that she is a general favorite. she begins, however, to tyrannize over Ellen, & treat her very badly. Nell is more mischievous than any monkey. she uses her scissars with fatal dexterity, & I am obliged either to take them from her, or to watch her as narrowly as possible, whilst she has them; she will snip up two or three yards of tape or ribbon, into pieces not an inch long, in less time than you would suppose possible, & has already cut up several of Bess’s clothes which unfortunately came in her reach. she sews or rather cobbles with equal celerity, & I know not a more hopeless task, than that of finding her employment; it she is like Michael Scott’s restless spirit, & were it not that she has great ingenuity in amusing herself, nothing short of making ropes of sea-sand, would be sufficient to keep her quiet off of my hands. once more adieu, love to all, & kisses for the dear babies; remember me particularly to Harriet & Lucy & through them to their mother & family generally. tell Mama she is much inquired after by all her friends here. love to Nicholas. 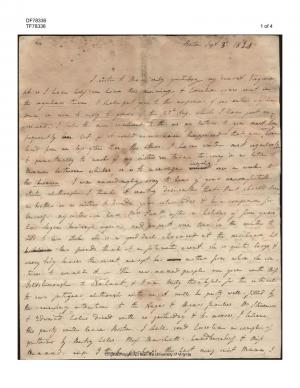