our late dinner has scarcely left me time I fear my dear Sister to despatch a letter to you before it grows dark, but having defered writing till evening, I have no alternative between making the best use of the little day light that is left me now, & infringing on the morrow morning, which being monday & consequently devoted to other purposes, I should be unwilling to do especially as I am just very industriously engaged in making up the frock sent me by Joseph, for which I again return thanks. it is much prettier than the calico’s we got in Charlottesville & thinner, which will render it cooler and more pleasant in this warm weather & therefore I am impatient to get it made. Mrs Dunglison is with us & will continue here some time longer, as her servants are all sick & most of them with the measles, which she is anxiously keeping her children out of the way of. this complaint which has been prevailing through the neighbourhood all the Summer, has generally been followed by dysentary & has terminated fatally in a great many cases. the mortality from this cause alone has been much greater than usual & as these things are always exaggerated by report. Charlottesville & its vicinity are considered by people not more than twenty or thirty miles distant, as the abodes of fever & disease & to be avoided as you would a pestilence. people are actually afraid I have been told to pass through them on their way to the Springs. there have been three deaths among the students at the University & these three have been magnified to such an extent, that it is thought the interests of the institution will be seriously effected thereby. thank heaven we have kept clear of the measles so far & we have so little intercourse with our neighbours that I hope we shall escape the danger entirely—at Edgehill they have been equally fortunate—Mrs Dunglison has two pretty children, and the youngest is one of the finest babies the finest baby of eight months old, I almost ever saw, he is so sprightly & so good humoured, has such deep blue eyes & such a fair complexion and a quantity of curling ab auburn hair that you rarely see on the head of an infant. how often I wish I could see your two sweet babies, added to the four that now [. . .] run about the house or roll & tumble on the floor in the green house, which serves as a very pleasant little sitting room for us, during a part of the day (when the sun does not shine upon the windows) & is at all times a favourite play place for the children. I do not rember remember whether we ever told you of the change that has been made in the rooms which once were once filled with my dear grandfather’s books. a very slight change, simply in the apartments themselves has made a great one in our comfort. simply filling up the smaller of the two arches in a very rough way, w[. . .] but in a manner however to do no injury to the arch itself, has given us a delightful sleeping room, large enough to hold two beds & furniture enough to accomodate three persons with ease & comfort, then we have the sitting room adjoining in which two more can be comfortably lodged, & the green house, a very convenient little appendage to our bed chambers. the rooms are laid off in a manner to suit our circumstances precisely & are besides very pleasant in themselves—I shall grieve to give them up when we go, and have thought with the pleasure of the probability possibility rather, of passing another winter here & watching the unfolding of another beautiful spring “over this delightful land” spring is now my favourite season & has taken the place of “sallow autumn” in my affections, I can scarcely tell from what cause, but the face of nature, when she dresses herself in smiles & loveliness as she does here so often, inspires me with a feeling of interest that all other things have ceased to excite, a feeling that approaches n more nearly to pleasure than any thing else other sensation I am capable of—my brother seems to think it uncertain whether this place can be eith[er] sold or rented, and if it cannot be, we shall remain here I suppose until another year. we are expecting a visit from Harriet & Lucy this month but Aunt Jane has given up all thoughts of coming to Albemarle. their prospects are so gloomy & they are evidently so very unhappy that it makes me sad to think of them. indeed there is nothing in [. . .] their future that themselves or their friends can turn to with any hope. the desperate state of aunt Jane’s health must be a source of unhappiness to her children which admits of no alleviation. poverty & hardship they might bear with patience but the too probable loss of a mother is a misfortune which nothing could enable them to look upon with calmness—mama desires her love to yourself & Joseph. she has received his letter & will answer it. this I believe is the sum of all the messages I am desired to deliver. we are sorry to hear that you are so thin—John Carr told us you were looking very well when he saw you. he was much pleased with the attentions he received in Boston & seemed to seems actually in love with Annie Coolidge—we have seen him but once since his return home though he promised t[o b]e a very good neighbour. your acquaintances Mr & Mrs Harrison Smith & Miss Anna Maria called on us before the house was cleaned one morning & staid several hours. I must bid you good night dear sister, with love to Joseph & kisses to the babies.

ever your affectionate
M 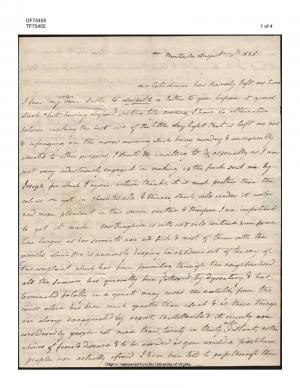