Looking at the date of my last “outpourings” I find them as far back as June 15. I have had abundant thoughts which it would have relieved me to communicate to these papers, at present my most confidential friends, but I have too little leisure for such communion. to day an a trifling incident occurred which, as I have a moment to myself, I will relate with the feelings to which it gave rise.

My children have not been well, for some days, owing to the warm weather, & other causes. they have fretted a good deal, particularly my little Ellen, a sweet interesting child, but somewhat spoiled by too great indulgence, as her mother has been before her. I heard this morning that my new neighbour, Mrs W—. L— had complained of the excessive annoyance of having cross children so near, & had declared her belief that these must be neglected, & rendered uncomfortable & unhappy by want of attention. this gossip came to me doubly distilled through the mouths of two servant girls; Mrs L—s & my own. I have a worse opinion of servants than Miss Edgeworth herself, & have freely expressed my disapprobation of those ladies who listen to their tattling; nevertheless, on this occasion I suffered myself to feel extreme indignation at Mrs L—s unneighbourly speech. few mothers can bear to have their children found fault with—besides, in this case, there was an implied censure on myself. my pride & self-love took alarm, along with my maternal tenderness; my imagination, as usual, exaggerated the offence, & I continued to chafe, until the approach of the hour for divine service, reminded me that I was in no fit mood to enter the house of prayer, & the presence of Him who declares that “whoever is angry with his brother, without cause, shall be in danger of the judgment.” my conscience whispered that the cause here, would not be admitted as a plea of justification. that I had felt exteme anger, for more than a moment, against one, who might even be innocent of the trivial offence which had excited a resentment so disproportioned. I acknowledged that it was equally ridiculous & unchristian-like, to suffer myself to be so seriously excited but by such little, wretched causes. By the time I reached the Church door, I had become more calm, the sounds of the organ contributed to soothe my ruffled temper—better thoughts succeeded—the service went on, & when the first lesson was read (it was the 19th Ch. of Proverbs) I paused upon the following verses

11 The discretion of a man deferreth his anger; and it is his glory to pass over a transgression.

19. A man of great wrath shall suffer punishment.

20. Hear counsel and receive instruction, and thou mayest be wise, in the latter end.

The Sermon, on this same day, was against indolence. the text likewise from Proverbs Ch. 6. V. 9. “How long wilt thou sleep, O Sluggard? when wilt thou arise out of thy sleep?” I listened with attention—I am myself a sluggard, fond of ease, averse to any employment which does not happen to fall in with the humor of the moment—not, indeed, unwilling to work but liking to chuse my work. looking the other day into a child’s book published in Boston, I fell upon a dialogue between a little girl and her mother, on the importance of “Energy”. Energy, I found to be defined (I forget the words & must substitute my own) as the power of doing, whatever we do at all, with with the same spirit & promptness which we exercise in doing what is agreeable to us. I will try to give my children the habit of energy, for it should be a habit, not an occasional impulse—so should be all our virtues be —so is all Virtue, for nothing deserves the name which is not steady in it’s course.— 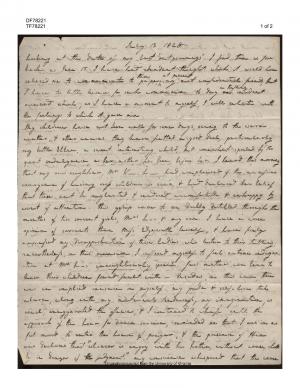