I have sometimes thought fancied that it would be a relief to the sad thoughts which often oppress me, were I to write occasional notes, recording not so much the events of my life, for they are few and of little interest, even to myself, but it of my feelings and reflections. my life has not been more chequered by [. . .] accidents and or reverses of fortune than life usually is, and perhaps my hopes have not proved more fallacious nor my disappointments greater than those of other people. I do not know—I cannot see into the hearts of my associates to learn whether they too have their secret causes of discontent—I can only speak for myself, and with me, I can trace the source of many of my present uneasinesses to an unfortunate education. I was brought up too tenderly—rendered unfit for an ordinary destiny—my friends, in their love, seem to have thought that I could command fortune & direct the events of my life—Nature gave me a timid and affectionate temper, great flexibility and docility, quick feelings, a & a lively imagination. I had a good memory and a ready comprehension, was easily influenced by the wishes or arguments of my friends, who finding me tractable affectionate & intelligent, lavished upon me every species of kindness, and as severity was evidently unnecessary in the education of one so ready to yield & to obey, they neglected to enforce even the wholesome discipline which was wanting to give strength to my character, and to render profitable to myself the good dispositions I had received from Nature. the voice of affectionate commendation was sounding always in my ears—I was constantly hearing of my own good qualities either from the partial friends, or the and flatterers of my family; or from through the indiscreet love of those who thought no praise could spoil me. I learnt whatever was attempted to be taught me, with so much facility & so little trouble to my instructers, that my talents were lauded to the skies, even in early childhood, & as I advanced in life, my good memory & ready imagination, furnishing me with a multitude of sprightly ideas & considerable fluency of expression my reputation, increased with my years age & the echos of this empty praise flew back from every quarter to ring in my [. . .] own ears. my family was, in my part of the country, a distinguished one, my grandfather every way an eminent man, & I was a darling with all. the numerous visiters who flocked to Monticello joined in the general homage, which I received in almost equal [. . .] profusion whenever I went abroad. What prevented me from having my head completely turned? from becoming ridiculous from by my vanity & pretensions. partly a timid & anxious disposition which operated as a perpetual check to the pleasure of being admired, whilst it increased the love of admiration, and partly that the good books which I read, & the very perfect characters of my grandfather & mother, which were always before my eyes, gave me a very high standard of moral & intellectual worth, with which perpetually to compare myself, & to feel that I fell far short of it. thus, whilst jealous of my reputation as far as the opinions of others were concerned, and warmly resenting the least expression of disapprobation, a language to which my ears were unused, in secret, I did myself justice; I was conscious of powers, which might have been turned to a better account, and of defects which slowly & silently growing, had become settled habits of mind and or action. but it was reserved for time & circumstances, & the changes wrought by them, to make me feel the full extent of my own deficiencies, & the evil which was to flow from them. But my paper is at an end, & along with it my leisure—[. . .] when I resume my pen, it may be, not to continue the present subject, but to give vent to some new train of thought or feeling. 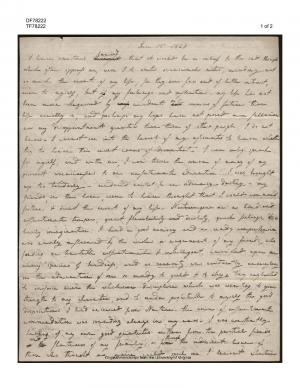