Your letter of the 2nd my dearest mother, was joyfully received and relieved me from a portion of those vague apprehensions which always attend me for some time after parting with those I love. I always feel as if there were some ill-defined danger hovering over my absent friends, & am ready to start at every noise as if I were expected to hear some thing bad news. I shall venture to address this letter to Baltimore trusting to Dabney Carr to forward it to wherever it is likely to find you should you have proceeded on your homeward journey; I presume you to have reached Baltimore last night; but you will probably be detained there some days & there is a chance of your being there still when this arrives. I got your letter yesterday morning & in the afternoon Joseph & myself went out to see George. we stopped in Cambridge, where he had some business, & whilst he was attending to it I remained with Mrs Stearns. I spoke to her of the bill which we thought too moderate, seeing that she has charged for two persons only, & you were all three together for at least a month, to say nothing of George; I found her, however decided against making any addition. she repeated often, when I thanked her for the kindness of her conduct to you, that she was the person under obligations, that she should be a better woman all her life for having known you, that your example was worth more to her than any thing she had had it in her power to do for you, could ever repay, that her only regret was her inability to do more. all this was said in tones & with a manner of heart-felt sincerity, and she wept like a child during the whole time she was speaking of you. you may suppose, my dearest mother, how I loved her for her power of appreciating you, & with what pleasure I listened to her honest expressions of admiration & veneration for your character & conduct. her attachment to you is very great, & she feels the void made by your absence as sensibly as might be expected from her affectionate disposition. she says her house has looked like a tomb since you have been away, & indeed it wore such an air of desolation to me, (though nothing could be neater & in more exact order,) that I was glad to get away. We then went on to Mr Welles’ where we found George at play in the yard. he came out to the chaise & set in it with us for some time. he was delighted with his book & his two dollars, & looked well & cheerful. he says he has got over his home-sickness in a great degree, & feels quite happy again. he is to come in & spend saturday night & sunday with us, as often as Mr Welles is willing he should, & I shall call every time I ride out. Mrs Stearns seems to consider him as under her protection, & she is not a person to be satisfied with talking kindness; she will act it too. we drank tea with Aunt Storer, who spoke of you with much interest, & did not get home until eight o’clock, where I found Ellen sitting up in bed waiting for me, & nothing would satisfy her but coming down stairs, & playing about the basement in her yellow flannel gown till after nine. she has been as bad as she could be ever since you went away, claps her hand on her hand head as a [. . .] sign for her bonnet, whenever she hears your name mentioned, but cannot comprehend that you are not still in Cambridge.

The pictures (& violins) have arrived safe & are unpacked, but I know there has not yet been time to arrange them for exhibition. in a day or two they will be displayed. the hams were in the same vessel.—on saturday after you left Boston, your box & trunk, with Jefferson’s Phillpott machine & ground glass, & the barrel of porter, were put on board a vessel bound for Richmond, & will I hope have a prosperous voyage. Joseph desires me to say to Jefferson that he need not buy the horse at present. he will wait until another time, when he can better afford the purchase. Be sure my dear mother to speak to Jefferson immediately on the subject. I deprecate utterly, what I consider as a useless piece of expense. we have one horse more than enough already.—

I have been sitting at the window this morning, watching the proceedings in the opposite house. on saturday, Lucy Ann Bradford left her card, from which I concluded things were approaching their crisis; all seemed quiet this morning until at half past nine I saw a carriage stop at the door, from which issued Mrs Wm. Eliot, a little while after another, containing Mr & Mrs Edmund Dwight [. . .] two of their children, then a third containing filled with trunks &c the travelling af[. . .] of the bride groom’s mother; the old lady herself slipped in without my [. . .] her, but stood shewing her neat quaker-like person & remarkably white teeth a[t] the window for some time after. William Eliot apparently in the sulks, twitched himself in at the door about the same time, & little Sam strutting in a new suit, blue cap & coat, & yellow pantaloons followed after. then came a solemn looking man in full black, the clergyman of course. the door was closed, the french blinds pulled down, & all was quiet for twenty minutes. then drove to the door a new stage coach with four large strong & beautiful bay horses, chartered for the purpose. the door flew open & a great bustle ensued, trunks, boxes, bandboxes, packages of every size & shape, made their egress from the house & were disposed with no small difficulty without & within the coach. the hind part & the forepart, & the top, & half the in side, were [. . .] barely sufficient to contain stow them away. in the midst of the hurry, little Sam ran in & ran out, & round the coach & before the horses, thinking himself the busiest & most important man of the party, having probably never heard the fable of the fly on the chariot wheel. presently all was ready. the lady mother was handed into the carriage followed by the bride & groom & Sarah Bradford. the driver mounted his seat, the reins were gathered up & one of the sweetest loveliest girls in Boston was consigned to a country village & a rustic not to say clownish mate, because she had not money to purchase a home and a husband in Boston. I kissed my hand to her as she drove off & gave her my best wishes for more happiness than I fear is in store for her. but I have felt sad ever since. a wedding is after all a melancholy spectacle.—

I carried the gown & handkerchiefs to Mrs Stearns’ girls, & have I believe executed all the commissions that were left for me. but it is growing late and my letter must go by this day’s mail. it is borne in upon me that I have not told you all I had to tell, but whatever is forgotten must be for another time. Mrs Stearns & Aunt S. send a great deal of love. I have not seen Mrs C— except for a moment in church since you went away but Grandmama & Elizabeth have both been to see me, & spoke, particularly grandmama, with a great deal of affection of you. Joseph sends his love as I do mine to Jefferson, Cornelia, Septimia & our friends in Baltimore, & on the road & at home. my pen is worn to a stump. farewell dearest mother, take care of yourself for the sake of the children you are with, those to whom you go, & those you leave behind.

I did not write on the multiplication cards in Jefferson’s trunk but they were for his daughter Mary.

there was $5.13 pd by Nicholas & deducted by him from Sally’s price, which I did not think it worth while to set down, also the shoes for Mr and Mrs Madison which cost exactly $5.00. the money enclosed to Mama. Joseph [. . .]. if Nicholas wants the tiresome little items of the above acct which I have included as et ceteras, I will give them at any time. Has Mr Davis ever pd the $30. due by Mr Key for Sally’s hire from Sept. 5. 1826 to the time when she was freed?— 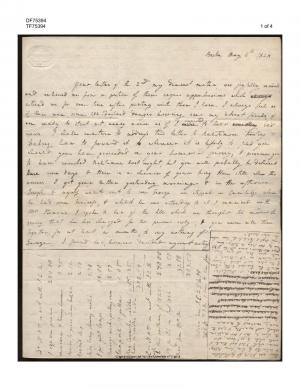