I have no room for more & yet have scarcely said all I had to say—kiss dear baby for me & tell me what time in Ag August you expect to be confined. love to Mama Joseph & the children. I heard from E. who has done extremely well, better than usual, in her confine[. . .] though her situation at the time of the birth was o[. . .]—ever & affectionately yours dearest Sister

do not forget to send my album by Mama. I hope you have written in it

I went yesterday evening to Morven, and was agreeably surprised to find Eliza Garrigues there. She desired me to give her love to Mama & yourself particularly by the next opportunity. poor Mrs. Higginbotham is in hourly expectation of being confined, & looks worse than I ever saw her. 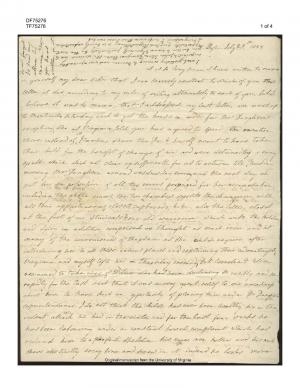