Sarah stays at home this sunday afternoon, dearest Virginia, & I, of course, have it in my power to write to you. I heard a most admirable sermon this morning upon the misemployment of the sabbath, but I cannot think it an abuse of the privileges of the day to pass an hour in this sort of conversation with those dear & distant friends, in whose presence I almost fancy myself, [. . .] when engaged in writing to them. mama too is not well enough to furnish her weekly letter, & I cannot bear that you should be disappointed altogether in hearing from her. she is not sufficiently sick to make me at all uneasy, but I doubt whether she will be able to write for two or three days. her complaint is severe cold, affecting her however in a much less serious way than by sore throat or sick-headach, & not even giving me an excuse to call in Dr Warren. the children are well, & doing well at sct school Sep. got the medal last week, which she wore suspended by a blue ribbon for the appointed time, seemingly much satisfied by this public mark of her school-mistress’s approbation. Christmas week was quite a merry one for her, & she has been to four parties (& dancing parties too) since Christmas day. this, you will say, is not making good use of her time, but it is a privileged season, & she has gone back very quietly to her lessons. one of these parties was given by her particular friend Miss Lucia Swett, a very good girl with whom I like her to associate. Septimia was pronounced the prettiest girl in the room, & one of the best dressed, & yet her whole equipment cost one of mamas a square of muslin, (one of mama’s turbans) and 7 cents to a mantua-maker for a fashionable body to he[r] black silk frock. the thing which set her off was having her hair curled behind in three tier of “gros boucle” which gave her head a very stylish air. George goes on very well at school, & was invited to all the parties, but could not be prevailed on to go to one. the only amusement he seems at all to care about is skating on Frog Pond, where there is at least small danger of his being drowned. they are both home-sick in spite of curls & skates & would gladly crowd in upon yoat you at Tufton. Baby continues well, but is growing coarse, & I fear losing her beauty in all eyes but mine.

How partial are those doting eyes,

No child was is half so fair or wise—in my opinion at least; and I hope you will take the same for granted making only one exception in favor of darling little Martha whom I long to see & kiss.

I know not whether it is worth while to give you the news of a city where you have no acquaintances, but I will at least for Cornelia’s benefit mention two illustrious marriages that are about to take place, George Lyman & Nancy Pratt, & Francis Gray (whom you have seen at Monticello with Mr Ticknor) & Elizabeth Pratt. every body exclaims “how proper, how suitable”, but for my part I think it quite a shame for such rich people to come together; those four will have what would have made eight wealthy & happy. the sudden death of Harrison Otis Jr. brother to Mrs Ritchie, (whom you may also have remember to have seen at Monticello a great many years ago,) has greatly shocked every one capable of feeling & reflection to the degree of making and made them forget [a]lmost every thing else for the moment at least. he was in a state of high & florid health, & dropped dead in from his chair, leaving a widow in mourning for her father, with two small children & on the eve of becoming mother to a third; I know not whether the blow will be as mortal to her as it is likely to prove to Mrs Otis the mother, who has survived four grown children & [. . .] is equally shattered in heart & health.

It grows dark, & I must leave a little room to tell you how mama is to-morrow. Joseph has written to say how anxious I am to possess some article from m[y] dear grandfather’s bed-room or library. something tha[t was?] connected with him & familiar to my eyes as his. I would not interfere with the wishes of the other members of the family who must be equally anxious with myself to own these precious relics, but I shall leave it to them to arrange make what dispositions they think best, & to take care of me as one of themselves. a great deal of love to all—I hope you are all revived in spirits by by this noble act of the S. Carolina legislature; indeed it would be ingratitude to Providence not to rejoice in the better hopes & prospects that are opening before us. farewell till to-morrow.

Jan. 8th Mama is better to day & has taken her breakfast in the dining room where we are both sitting at this moment. I have run over my letter & find it stupid & incoherent as all my letters are now. I have so little time & am so worried with bad servants that I believe I shall turn fool before I die. tell C— that the Moorish Bridal song is by Mrs Hemans. there is a complete set of her works coming out in Boston published by subscription & for her benefit as she is quite poor. two octavo volumes are already issued & in one of these I find the song. her name is pronounced, not Heemans as we are used to call it but as if written with a double consonant, Hemmans.

love to Jane, Jefferson if he has got home, Nicholas, the girls & all, with kisses for the children. most affectionately yours. 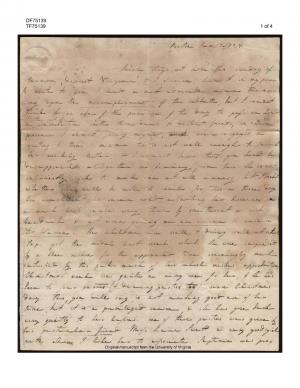