Mr Jefferson inherited a large estate, and his wife brought him a handsome fortune, but encumbered by British debts, of her father’s, to a great amount: to affect the payment of these Mr Jefferson sold a part of his property, & received the proceeds in depreciated paper money, which were of course wholly lost. he sold again, & deposited the amount in the loan office of Virginia; but, the State failing to make good her engagements, all was again lost! a third time he sold property to the amount of the debt, which was at length paid at a sacrifice of treble the original sum.—During the revolutionary war his estates were visited by the British troops, & laid waste with peculiar animosity; and whilst in office, as governor, or in other situations of public trust, he, in common with other servants of the public, received his salary at the nominal value of paper money, whilst his expenses were paid according to it’s real value.—

By his advice an orphan sister had been induced to place her fortune, in money, in some fund where it was lost, & he conceiving himself to have been the cause of the misfortune, paid the amount from his own resources. nor was this the only instance where his sense of honour prevailed over all considerations of personal interest.—His long absences from home, during the many years of his public life, could not fail to be injurious to his private interests; but, when he retired from the office of Secretary of State, his property was still adequate to his wants, not materially encumbered with debt, and himself still possessed of comparative youth, with health of body and energy of mind, and prepared to make the most of his resources & pass the remainder of his life in the bosom of his family. But the two great parties into which divided the nation was were now arrayed against each other, & he was called upon to take part in the conflict. it is a fact well known to many, that it was with extreme reluctance he quitted his retirement, from which he was drawn, most unwillingly, by importunities the most urgent.—

In the year 1809 he finally withdrew from public life, but under circumstances very different from those in which he had entered it. He was now old & broken in constitution; his estates mismanaged by agents & neglected by himself were gone to decay & encumbered with a load of debt. He had, on his return from Europe, prohibited from motives of humanity the cultivation of tobacco, to any extent, upon his farms, for this crop is raised at the expense of great labour & hardship to the slaves. it was, however, by far the most profitable, and had been one of the chief sources of his income, which experienced a very considerable diminution in consequence of the prohibition.—

The very measures which, in his public character, he had thought it his duty to support, pressed upon few individuals more heavily than on himself. there were few over whose fortunes the Embargo, & Non-Importation acts exercised a more disastrous influence. His household expenses were necessarily great, for his doors were open to numerous visiters, hospitably entertained, although in a style of entire simplicity, for as much economy prevailed in the mode of life at Monticello as could be made consistent with the comfort of the guests.—The sale of Mr Jefferson’s library for little more than half it’s supposed value, procured a short respite from impending ruin; but the causes of decay were still at work; there were still heavy debts which every year increased, for his income was now inadequate to his support, & the payment of the interest of on his debts. his anxiety lest his slaves should be over-worked or ill-treated by their overseers, was carried so far, that these people did not earn wherewithal to enough to maintain themselves, but brought him yearly still farther in debt for their support. Under these circumstances came an endorsement for a friend, the late Gov. Nicholas, whose inability to meet his engagements threw upon Mr Jefferson the payment of a large sum of money and, the times being difficult, at a sacrifice which completed his ruin. the forced sale of his whole estate must have been an almost immediate consequence, had not his grandson Mr Jefferson Randolph rendered himself liable for the debts of his grandfather & assumed a responsibility which may ultimately involve himself & family in the wreck.—

Much has been said of the elegance of Mr Jefferson’s establishment at Monticello, but there is no person of candour who has ever visited there who could not testify to the contrary of all this. the house has been fifty six years building and is still unfinished. a great deal of the work has been done by Mr Jefferson’s own slaves amongst whom there were many tradesmen. there was but little furniture in it & that of no value, and many of the articles made by the negro workmen. the furniture which he had owned in Paris & Philadelphia, he had sold on his first retirement from public life, as of a kind not proper for a country house. his paintings, which were some of them very good, were purchased in Paris, principally at auction and at a time when his circumstances were prosperous. the only statue in his possession was a present from Gov. Bowdoin of this City, and his busts, although valuable as correct likenesses, were, with the exception of two, done in plaster.— 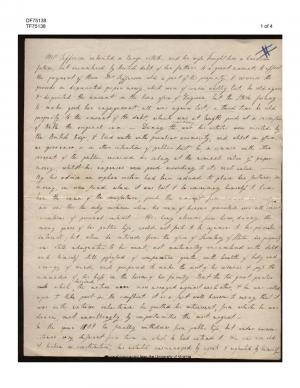