I should fear, my beloved Virginia, that my failing to congratulate you at an earlier period on the birth of your daughter, might pass as a proof of indifference, if I were not too well persuaded of your confidence in my affection, to suppose that you could doubt it for an instant. believe me, dearest, that my heart has seldom known a more lively joy than it felt at learning your safety & well-[. . .] well-being. my little cherub niece too is doubly dear to me from hearing how little comparitive trouble she gave you upon her entrance in the world. she will give you much of another kind as soon as you get strong enough to wait upon her; but in no instance will you quote. more readily quote Youg Young’s expression “life’s cares are comforts", nothing that you can do for your child will seem too much to you. many blessings wait on you both, dear sister, & health & happiness attend you!—I have not written sooner because from want of time I have been for some time entirely without a nurse, Cornelia & myself since the departure of Mrs Le Moyne, the monthly nurse, having minded the baby entirely ourselves until within the last three days. the curse of domestic life in New England is the insolence & insubordination of the servants & the difficulty of getting any that do not give more trouble than they save. I hav[e] engaged another chamber-maid & committed my infant to the care of a woman who has [. . .] lived with me in ever since I began housekeeping, & is at least trust-worthy, although little skilled in the management of children, of course I am still a good deal confined to the nursery. had it not been for Cornelia I should have broken my heart with work (as an over-driven horse does,) during the interval (one fortnight) between the going of Mrs Le Moyne & the coming of the chamber-maid. I was still feeble & nervous & the baby grown strong & obstreporous, & having the sole charge of her day & night I would should quite soon have sunk under the fatigue. she is a good little thing, never frets from fretfulness, but eats far more than she sleeps, & delights in being dandled. I attempted to dress her myself, but her screams & resistance were too much for my strength, either of mind or body & before the toilette was half over I cried as heartily, though not so loudly, as she did. I felt dreadfully ashamed of such hysteric weakness & laid the whole blame where it at least certainly rested in part was due, to my bodily feebleness. Cornelia upon this took the office of tiewoman to my princess upon herself, & discharges it (after a little practice) with considerable skill. the young lady screams at the top of her voice, and battles most furiously & screams at the top of her voice, not with the cold water for that she does not object to, but with her clothes, which she regards as sad incumbrances, nothing pleasing her better than to lie, after she has been washed & powdered, in tossing her arms & kicking up her heels, on her aunt’s knees. & thus she would remain, without a rag to cover her, the whole day through, if her own will was consulted. Cornelia’s visit to Boston will be one of any thing but pleasure. besides that she has really undergone fatigue in the baby’s service & done servant’s work for her, there is at present an utter stagnation of any thing like gaiety in Boston;—no parties, no visiting, no places of public [. . .] amusement open, the weather unpleasant as it is always in is, at this season;—an occasional walk or ride, & a little chat with Miss Lucy Jane Bradford I constitute almost the only amusements within her reach. I fear she will hardly be willing to wait until I can carry her home. sooner than the month of August I cannot hope to leave Boston. Joseph’s business is all important to the support of his family. this has been a heavy year with him, what with furnishing his house encountering the expenses of house-keeping & having me sick the whole winter, with doctors & nurses & babies in the spring to be paid & provided for. a great many failures have taken place lately, more than have been known for a long time in Boston, & all things considered, it becomes us to be more prudent than we either of us well know how to be. his European habits stand in his way, & with all my desire to be economical, my utter ignorance of house-keeping (for I find myself totally without knowledge or experience of a kind to be the least useful to me here) & my inability to manage my white servants who waste & destroy ad libitum, are sad stumbling blocks in the my path. but “esperance en Dieu”.—let us do the best we can, & “hope all things”. Jefferson has not let us hear a word from him since he left us. I never felt more sorry than at being confined during his short visit. not only I could not pay that attention to his comfort which I would have done, but I was almost debarred his society by the numberless restrictions imposed upon me by my nurse, who if I uttered two sentences at a time would beg me not to talk & worry myself, & if I set up one moment beyond the regular hour for lying down, was sure I should die with a pain in my back.

Cornelia meant to have written to Mary by this post but wil[l] defer it until the next in consequence of my writing to you [. . .] deeply in dear Mary’s debt but she will excuse me, I am s[. . .], for addressing this letter to you, in consideration of the event which has come to my knowledge since I last wrote to you. I hope I shall become a good correspondent once more now that my Elenita has a n[ur]se, although I have still much to do, and am literally as busy [. . .] a hen with one chicken. how I envy you the privilege of [ca]lling your daughter Martha, a name dearer to my heart tha[n] any other & consequently more pleasing to my ears.

Adieu dearest Virgin[ia], love to all, more especially to my beloved mother, whose letter from Ashton I have received & will very soon answer my dear love also to Nicholas & 1000. & 1. kisses to my niece. kind remembrances to Tufton & Ashton & Poplar Forest & to those of my neighbours who think of me. poor Mrs Dearborn is dead. her property was so settled, it is said that the Gen. will not get more than $10,000 . Mrs G. Sullivan near $ 150,000. Mrs Lyman is also lately dead. her illness delayed Sam. Eliot’s marriage which will probably take place next week. once more adieu & pardon this blotted scrawl written in haste & at intervals. ever your own

Joseph offers his warm love & congratulations. he is not at home to add his own postscript. 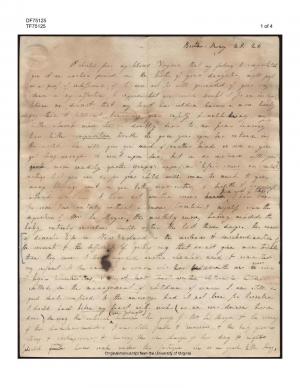