Your letter, dearest mother, post marked the 16th reached me this morning, and I am attempting to answer it by candle light to be secure of to morrow’s mail. I am greatly relieved by the knowledge that the terrible business of the sales is over past; it has been hanging like a dark cloud over our heads, but too long, & now that the cloud has burst & discharged itself, we know are aware at least of the extent of the evil, & have I know not whether the worst reality causes as much suffering as the fearful anticipation of an uncertain future. the counter advertisements which I have been noticing for some time in the Central Gazette, have kept me always uneasy, and dreading some violent explosion, some disgraceful eclat, & I am less grieved at the result of the whole business than I expected to have cause to be. your sufferings, my dearest mother, I can fully understand, & I feel a strong hope that you will yourself experience, at least, a great mitigation of them, now that the tortures of suspense are over. my dear brother I have long believed to be one of the noblest spirits ever enshrined in a mortal body, and my confidence in the strength of his judgment & the wisdom of his measures could only be equalled by my faith in his magnanimity & affectionate disinterestedness. I do not think his character will eventually suffer from false appearances. he is too well enough known, & the unfortunate circumstances, in which he has been placed, sufficiently understood, to justify even what might otherwise have an unpleasant aspect in the eyes of the world. there will always be carping & caviling against any line of conduct pursued by any man whose situation is in any respect difficult or delicate. not the most perfect wisdom & integrity can guard against the spirit of detraction, of envy, or of ignorant gossiping, but all this is but the barking yelping of curs which may fatigue & vex but can never seriously injure, & even if a few whose good or evil opinion is of importance should be deceived by passionate or mistaken statements, & false appearances, it is what can scarcely be avoided under any circumstances. I thought it best to make Joseph fully acquainted with this business as far as I myself understood it not only from the great confidence which exists between us, but in justice to my brother, & because I saw no good in the partial suppressions which I might have made at the expense of my own candor & perhaps after all ineffectually. he knows too much of my father’s Temper & habits to be surprised at the course which he has taken, & I am most anxious that he should be fully aware of Jefferson ’s value, & do entire justice to his good & great qualities, & his undeviating rectitude & generous devotedness to the interests of his unfortunate family & friends—I could not help asking my dear Joseph if he felt no regret or uneasiness at having united his destinies with those of one belonging to a race so persecuted by fate; but his only regret is that a his own limited fortunes affords him no means of propping those of his wife’s family.—

The box brought by the Carrier contained all the articles mentioned in your letters, even dear Septimia’s otta of rose had not escaped, & the shells were unbroken. the pincushions we thought beautiful, and as I have two very fine dressing tables, (one in my own chamber, & the other in our best spare room,) which these pincushions suited exactly, I distributed them accordingly, compounding with Joseph for half of my own if he would give up his for the use of the state bed chamber. I am at this moment writing at the precious desk which has served my dear Grandfather so many years, & would be invaluable to me for this reason only, even were it not a political relick associated with one of the greatest events of American history. the inscription too in grandpapa’s own writing was most grateful to us both, & I felt proud that my husband should receive such a mark of kindness & consideration from the being, whom both in his public & his private character, I most revere upon earth. the chessmen were not even chipped, nor the counters; the furs & every other article were equally safe.—thank John H— for the butter-prints which suit me precisely.—

I wrote to Virginia this morning,—half a letter,—& purpose to conclude it before the regular day for writing—Joseph added a postscript on a subject very near his heart, the visit of one of my sisters—It would give me more pleasure, more happiness, than I can well express, gratify Joseph’s family & friends who are all anxious for it, put us to no kind of expense or trouble, and yet I feel afraid to press it; it seems selfish in me to wish to throw the whole business of the house upon you with only one assistant, for V—, if she is not already, will probably soon be not in a state to do much, & if you were to be ill I should not cease to reproach myself for having been the means perhaps of rendering you so. besides my own situation would prevent me from doing as much to amuse & gratify either of the gir[ls] as I might do at another time, although I feel am very certain tha[t] [. . .] argument would weigh as nothing in their minds—but I believe [I] have said as much upon this subject as will make you, dearest mother, understand my feelings perfectly.—

What think you of that crazy Mrs Morris writing to Joseph a letter of abuse against De Witt Clinton, enclosing another abusive paragraph from a newspaper which she prays him to have republished in Boston. if he refused she would of course become his enemy for life & load him with her course invectives, if he obeyed—it would be meddling in a subject in which he takes no interest, & in which whilst his connexion with my grandfather on one hand & with many of the most leading federalists of Boston on the other [. . .] indisposes him, as much as his own natural inclinations causes, from meddling with party politicks. it mortifies me that he should be baited by a drunken brute like Charles Bankhead & a brain-sick shrew like Mrs Morris, whilst Aunt R— pesters him with about her cookery books, but he takes it all so kindly that it makes me love him the more. I am glad the french ladies gave satisfaction were it not for grandpapa’s scruples, I could frequently transmit them. they cost but 25 cents a piece, so that I think even you dear mother, with all your delicacy could not object to my getting them for the girls whenever they wanted a new fashion. I remember your ideas upon this subject, & your precautions & shall limit myself accordingly to the merest trifles when the piano goes. a new song for Virginia, a lithographic engraving for C— some french sealing wax for M— & a pound of sugar candy for the children or some such matter. farewell dearest mother, my eyes have held out I verily believe because I was writing to you. Joseph sends his best dearest love, & Mr Baldwin prays to be remembered to Cornelia. he is one of our most frequent visiters. once more adieu & think of me as loving you better even if possible in absence than in presence.

love & kind recollections to all; not forgetting Colonel Carr!

I wish Nicholas would ask Mr Key or Mr Bonnycastle to review Professor Farrar’s course of Natural Philosophy, (two vols of wh. are just published,) for the next no. of N. A. Review. 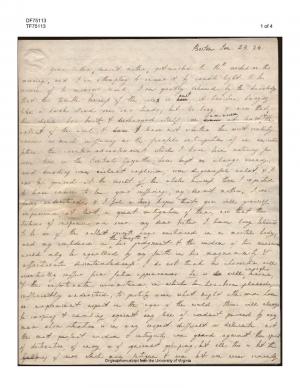