—I have received Virginia’s letter for which she has my best thanks. I am in debt to all my sisters & shall begin to pay off as soon as I can. the piano is not yet quite finished. mine continues as stiff as ever partly because I have so little time to practise on it. I wish you could give it a little suppleness for me; the tones are the finest I almost ever heard. I forgot to say to the girls how much I had been disappointed in Mary Lyman’s beauty. I never saw her until lately although we had exchanged calls. the standard of beauty is different here from what it is with us. Miss Lyman is thought in Boston the ne plus ultra of female loveliness, but when I remember the Peri brightness of Elizabeth Phillips & the holy calm of Mrs Middleton’s unearthly countenance, I cannot understand how a face & figure so little spiritual so entirely mundane as Miss Lyman ’s could ever be thought of as a standard. there is regularity of feature & [. . .] freshness of coloring & a good sensible discreet face enough; but nothing romantic, nor classic nor saint-like. nothing of the heroine nor the Greek statue nor of Raphael’s Madonas.

adieu dearest mother. Joseph sends his warm love, mine awaits all my dear ones. kind remembrance to my neighbours & especially to Mrs Dunglison. ever your own 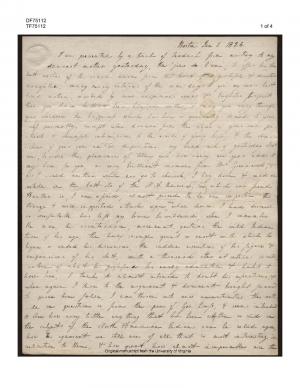